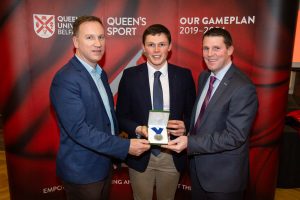 Fifteen years after his untimely passing, Cormac McAnallen’s memory and legacy was marked with the eighth presentation of a special annual medal in his honour at Queen’s University this week.  The university’s GAA club and Past Members’ Union initiated the annual award in 2012, which was presented at a special reception at the university.

Guest speaker for the event was Colin Holmes, the current Tyrone Minor Manager. Colin played with Cormac for both Tyrone and Queen’s. They famously captured All Ireland and Sigerson Cup titles together in 2003 and 2000 respectively. Cormac’s brother Donal McAnallen presented the award.

Callum O’Neill is in the final year of a BSc in Food Quality, Safety and Nutrition at Queen’s and managed to balance his academic commitments with the captaincy of the 2018 Sigerson Cup team, as well as serving on the club committee.  He is a former student at Abbey CBSG in Newry and has played at all grades with St Laurence O’Toole’s, Belleek in Armagh.  Callum has also captained the Armagh u20 team.

Cormac McAnallen was an exceptional sportsman and his untimely passing in 2004 cut short a remarkable young career.  He played at Queen’s for four years, winning a Sigerson Cup medal in 2000 and a Ryan Cup in 1999.  He also added an Ulster and All-Ireland double with Tyrone in 2003 as well as an Allstar.

Cormac graduated from the university with a BA Honours degree in 2001.

The Past Members’ Union was formed under the chairmanship of the late Paddy O’Hara in 1990.  The PMU was established to foster continued friendship among alumni of the club, while supporting initiatives and ongoing development of the present Gaelic Football club.

John Devaney, Queen’s GAA PMU Chairman, said that “We are delighted to present this award to Callum as a very worthy recipient. The Cormac McAnallen Medal is recognition not only for contributions on the field of play but also for the impact that any student can make with the Queen’s GAA Club and environment off the pitch.

Callum has displayed strong qualities of leadership and character in all facets of his roles as a player, administrator and club member at Queen’s and Cormac was a standard bearer for all of those qualities while he studied here.

This Medal has become a prestigious honour and it will hopefully encourage other players and members to aspire to achieving it”.