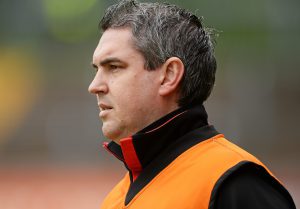 A Law graduate of the University, Mulholland has previously managed Down Minors and his home club of Ballyholland in Division One of the Mourne County Leagues. Most recently, Shane steered Rostrevor for two seasons, culminating in a County Intermediate Championship and an Ulster Final appearance in 2017.

Aidan O’Rourke of Queen’s University commented that “The Committee and Past Members of the Football Club at the University are delighted to have secured the services of a professional and ambitious leader in Shane Mulholland.
Shane has worked diligently at various levels to build an impressive bank of experience and has the starting benefit of knowing the sector well. The players are looking forward to a new direction under Shane and his coaching team and are excited at the prospect of the new season.”

Shane Mulholland is Senior Vice President of Marketing for Kx – a division of Newry based global technologies company First Derivatives and will be assisted by two previous Sigerson Cup winners in Derry’s Gerard O’Kane (2007) and Fermanagh’s Peter Quinn (2000).

Shane enthused that “I am delighted to have the opportunity to lead QUB into the 2018/19 Campaign. I have some quality players to work with, and the right men alongside to maximise that talent. The short season and the many demands on the modern Sigerson player make this a great challenge but one I am relishing. The very clear aim is to bring QUB back to the latter stages of a tournament where there is a rich heritage. I now look forward to working with the players in the weeks ahead.”