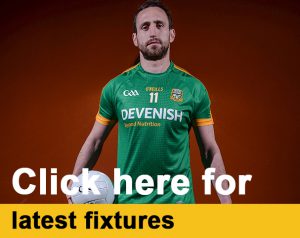 This competition will start on the grace week following the completion of the Intercounty All Ireland League series and a week before the beginning of provincial championships
County panellists will be unavailable for the opening weekend and thereafter only if not included in match day 24 each weekend
Leagues are scheduled to last 3 months. The majority of clubs will be without county players for less than a month
Counties reaching an All Ireland final will have players available for the final 1/3 of all county leagues and play offs

1. Players included in the county panel are unavailable for subsiduary club competition
2. Four weekends of competition to prepare for the beginning of All County Leagues
3. Two teams move between Junior, Intermediate and Senior – one each via league and championship

1. Leagues reduced to 12 teams (Junior B 13teams) with eleven (12) league fixtures
2. league winners determined by a final between position one and two in the final standings
3. League relegation determined by a play off between position eleven and twelve in the final standings
4. Junior A teams positioned 1 – 8 seeded for Junior championship
5. Relegated teams are those losing league and championship relegation play off finals
6. In the event of a team relegated via the league winning the championship, the winning league relegation playoff final is relegated
7. In the event of the league winning team also winning the championship, the league runners up are promoted
8. Seeding for Championship groups determined by final league positions
9. Positions 1 – 4 top seeds, 5 – 8 second seeds and 9 -12 third seeds
10. Championship draws take place weekend of 10th August
11. Club fixtures should be offset from county team fixtures until county season complete
12. CCC may identify 2 weekends to use “slippage” dates and promoted as such to accommodate holidays

1. Senior and Intermediate Championships consist of 4 groups of three seeded teams
2. Three group games determine quarter final and relegation play off positions
3. Quarter finals consist of 4 group winners drawn against runners up
4. Relegation semi finals populated by the bottom team in each of the four groups

1/4 finals: Group winners drawn against Group runners up
Relegation 1/2 finals populated by bottom team in each group
Losers of relegation final are relegated along with team who loses league play off 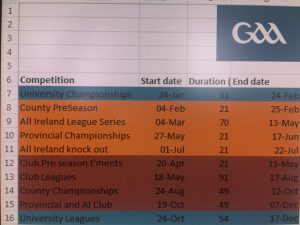 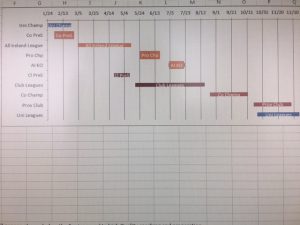 Highlights of the system for County Football

The All Ireland leagues and Championships are directly linked
County football will mirror club football in producing Senior, intermediate and Junior league and championship winners
Every league and championship game will be against similar standard teams and carry meaning
Every team in the country has a route to winning the Senior All Ireland Championship each year
The provincial championships regain a coveted status and offer a route to the Sam Maguire
Each province is guaranteed at least one Senior All Ireland ¼ finalist
There are 10 meaningful intercounty trophies on offer every season
The county season runs a minimum of 4 and ½ months and 13 meaningful matches
The county season runs a maximum of 6 months and 19 meaningful matches
More matches and less training

Highlights of the system for Club Football

It is proposed that County competition adapt a match day squad of 23 players and an interchange substitution policy.
All players not named in a match day 23 plus 1 reserve must be released for club duty on that weekend
Counties are obliged to name this 23 + 1 by Friday at noon before any weekend games.