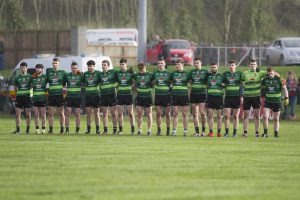 After a bright Ryan Cup campaign and several friendly match wins against county opposition pre Christmas, the McKenna Cup proved to be an attritional affair with heavy pitches and fluctuating team selection due to availability. With a seven day recovery period and several players coming through McKenna Cup semi final duty unscathed yesterday, the squad and management are looking forward to welcoming DCU to the Dub with a team approaching full power.

DCU will present formidable opposition as recent winners and 2016 finalists but James McCartan’s squad has been a couple of years in development and contains a fair sprinkling of county senior panelists: Armagh (4), Down (4), Derry (2), Fermanagh (1), Antrim (1) and Donegal (1).

All roads lead to The Dub on Wednesday for the opening of this year’s blue ribband Higher Education football championship and the eye catching tie of the first round.