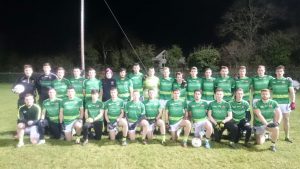 The competitive element of 2017 gets underway in earnest this Sunday as the McKenna Cup swings into action to shake the festive cobwebs from players and supporters alike.

Queen’s University will open their account in the competition by travelling to Downpatrick, where Down will ready a warm welcome. The traditional links between Queen’s and Down remain. Club Vice President Sean O’Neill is a Mourne county legend, Down Vice Chairman John Devaney is Chairman of the Queen’s Past Members’ Union and current Sigerson manager James McCartan of course previously led Down to an All Ireland final in 2011.

Ironically, it is anticipated that more than half of the Malone Road based team will be Down men on Sunday. If so, Eamonn Burns will have rich pickings to consider as he prepares his squad for the fast approaching National League division 2 campaign.

Queen’s will be able to call on some senior Inter County experience in the form of Shea Heffron (Armagh), James McMahon (Fermanagh) and Marty Clarke (Down).