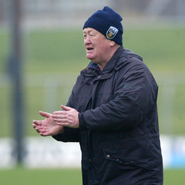 It is with great sadness that we heard of the sudden death of our friend and colleague Dave Billings. Dave studied at UCD in the 1970s when he graduated with a first class honours BComm, and worked for the last 18 years as UCD Gaelic Games Executive. During these years his dedication, integrity, enthusiasm and kindness marked him out as living example of all that is best in university life.

He believed in the idea of Ad Astra and lived his life in its service. More than that, he sought to help others find a path to reach their potential both on and off the field of play. As news of his death spread around campus and beyond to people who had formerly being involved with UCD GAA, there was a profound sense of shock. It is a tribute to the sense of community that Dave created on campus that more than 300 students, former students, staff and friends come together at lunchtime on Wednesday to pay tribute to him just hours after his death.

In a tribute to Dave at the service Brian Mullins, UCD Director of Sport said:

“I met Dave first over 50 years ago, he lit a fire in me then and it has burned ever since. Dave lit that fire in everyone he ever met. He was a born leader, a man who dedicated so much of his life to helping others achieve their full potential. The belief he showed in so many people has been vital to so many lives. Dave’s sense of community building has left an everlasting impression on UCD, across the whole College. Here in UCD, Dave was our Moses and our Methuselah. He transformed the lives of generations of young people and that is his greatest legacy on campus.”

Dave used every occasion to promote sport in UCD and he understood and championed the importance of sport in helping students develop. He wanted to win and he did everything he could to win, but recognized that sport was about more than the result of any match. Under Dave’s direction UCD GAA has been a home away from home for so many. He shaped the lives of thousands of students, making every individual important to him and to the club.

He believed that the value of playing sport in university was something which would stand to students for the rest of their lives. For instance when UCD hosted the centenary Sigerson Cup competition in 2011 Dave wrote a foreword to the history of the competition, which, was published to mark the occasion. What he wrote encapsulated his views on the meaning of sport in a University.

“The Sigerson Cup is more about memories than medals. Long after student days are over the mention of the Sigerson Cup recaptures the days of our youth, of teammates who you would die for on the field and they for you. In these memories, we stay eternally young. Time moves on, of course, but in the mind it is not the grey haired middle aged man that you see in front of you; rather it is the dashing, young athletic man in his prime, on the field of play.”

The centre piece of what he wrote was a quote from William Wordsworth, which he believed encapsulated the vigour and joy of youth:

“Bliss was it that dawn to be alive
But to be young was very heaven.”

It was these sentiments that made Dave so successful in his job in UCD and marked him as perfect for the role. Previously, Dave had enjoyed an extremely successful career in financial services, while also lecturing in the UCD Smurfit School of Business.

On the playing field he won All Ireland Senior Championship medals with Dublin and numerous medals with his beloved St. Vincent’s. Proud among his many achievements was his Sigerson Cup medal with UCD. His involvement in the GAA at club and county level also extended to roles as selector and manager with numerous teams. He was an immensely popular figure in Dublin GAA circles, whether it was in Parnell Park, Croke Park or St Anne’s Park.

Dave was a well-known figure around Dublin on his bike. He seemed to always be cycling somewhere these days. Deep in contemplation. Headphones at the ready. He always had a wave and a smile and a line or two for those he cycled passed.

His greatest legacy, however, is his unique personality, which made him loved by so many.

A devoted family man, his friends and colleagues in UCD extend their sincere condolences to his wife Annette, sons Cathal, Liam, Neal and daughter Hannah.