Team of the year 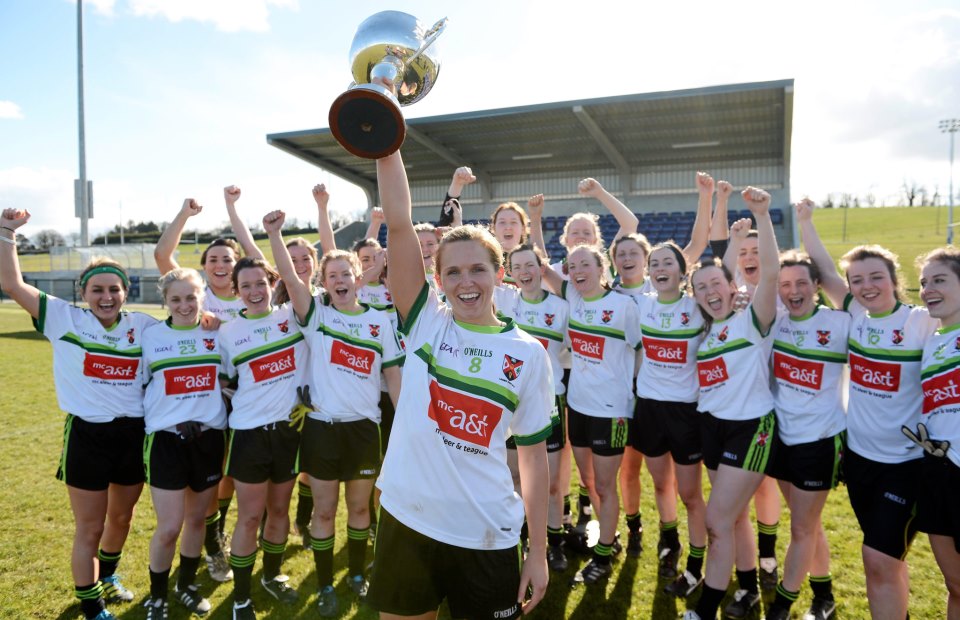 The team went strongly in the National League in October and qualified for a league semi final against UL in November, where they underperformed and lost heavily. The Fresher team would lift spirits by winning the clubs first ever All Ireland title and six of this team would progress to take their place on the starting senior team for the Championship.

Having beaten neighbours UUJ & Sligo IT (all away from home) to get to the O’Connor Cup weekend, the girls gained revenge for the first round when they defeated champions UCC in the semi final after extra time. This needed a heroic performance, coming from behind deep in injury time, and represented a statement of intent. The final was played the following day, broadcast live on National TV.

The girls produced a commanding display to beat perennial competitors DCU 4-10 to 1-09. Captain Sinead McCleary collected the trophy and Ruth Kearney collected the player of the match having scored two goals and torn DCU apart. Both girls are GAA Academy members of distinction – Gold and Silver grades respectively.

The images of Queen’s girls playing with such pacnache & skill, completely upsetting the perceived top three teams in the country and conducting themselves as perfect role models live on National TV reflects favourably on Manger James Daly & his coaching staff and on Queen’s University as a sporting and Educational Institution.

It should be noted, and not underestimated, that this O’Connor Cup win is only the ninth Senior Football All Ireland Championship win in the history of Gaelic Games at Queen’s University. This is almost as notable as the fact that it is the Ladies’ Club’s maiden victory and a victory that came against the odds after the girls went to the Intervarsity weekend as complete outsiders, drawn initially against the champions and strong tournament favourites.

Sinead McCleary’s most significant achievement in 2012 / 2013 was to Captain the first Queen’s Ladies GAA Team to the first All Ireland Title in the nineteen year history of the club.

Sinead proved to be a fantastic leader on and off the pitch and did so by setting standards of conduct and performance that many of her peers could only aspire to. Those aspirations proved to be enough to encourage, cajole and sometimes even transform other players towards inspired performances that would ensure that this fantastic group of girls’ place in the history of the GAA at Queen’s University is assured, together.

The Ladies Football Senior team and defeated champions UCC in the semi final after extra time thanks to a heroic performance, coming from behind deep in injury time, and in no small part to Sinead’s dynamic play & immaculate free taking. The final was played the following day, broadcast live on National TV. The girls produced a commanding display to beat perennial competitors DCU 4-10 to 1-09 and Sinead collected the trophy.

Fittingly, Sinead was awarded an combined Universities All Star and a place at midfield on the team of the tournament.

Accepting the trophy and speaking live on National TV, Sinead was symbolic of all that is fantastic about the sporting programs at the university and the all round people that they mould.

Sinead played midfield on the Armagh team that captured the All Ireland Intermediate title in Croke Park last October and has been extensively recognized for her performances for her county, in particular winning the County player of the year award.

This spring already she has led Armagh to the National League final, top scoring in the league despite missing two of their games through placement with her University Course.

Sinead also led her club team, Clann Eireann, to a Senior league and championship double in the Autumn and has been honoured by selection on the Ulster inter provincial team each of the last four years and recognized again last week in the same manner.

Sinead has been a leading member of the Sean O’Neill GAA Academy. She has set new standards of performance for Ladies GAA within the academy over the last three years and is the only member of the 2012/13 Academy class awarded Gold status this year across all GAA codes. In short, Sinead is currently the brightest star within the GAA at Queen’s University.

The early nineties saw the advent of Ladies football played at club and county level in Ulster. In 1992, Monaghan Ladies won the All-Ireland Junior title, and Ulster staged an inaugural Ulster Club Championship.

These events provided a catalyst to the growth of Ladies Gaelic in the province, that this would spread to College level was inevitable.

The Queens’ University Ladies Gaelic Football Club was founded in 1993-94 by Maura McCabe (Enniskillen) and Maura McArdle (Killeavy), whose enthusiasm secured support from the Men’s G.F.C. Established as an arm of the long standing QUB Gaelic Club , the Ladies set up their own committee and a team. The first Ladies Gaelic Team fielded in the inaugural Ulster League and Championship which was organised by the newly formed: Ulster Colleges Council.

The new season, 1994-95 saw Queen’s Ladies adopt their own Constitution and were approved by the University as an independent Club, with about thirty active members. QUB participated for the first time at All-Ireland level in the O’Connor Cup. A second round defeat in this competition by UUJ saw the Poly progress to the Finals weekend of the All-Ireland. The date however clashed with their hosting of the Dowd Cup weekend. UUJ opted to play in the former and Queen’s hosted the Dowd Cup at short notice. The Club’s first attempt at such an undertaking proved very successful and QUB has proved to be a popular venue since.

In 1995-96 our taste for hosting led to the inaugural QUB Ulster 7-a-side Competition, co-ordinated by Martina McCafferty and Cathy Gallagher. This proved to be a well attended and highly successful event, not least because we won it!

QUB also applied successfully to Colleges Central Council to secure the hosting of the All-Ireland Championship weekend, the O’Connor Cup 1997. This would be the competition’s first visit North in it’s ten year existence. On the field Queens’ participated in the inaugural Freshers All-Ireland 7-a-side Blitz, and performed admirably, despite only having seven Freshers!

In recognition of the clubs effort over such a short period of existence , the University Colours Committee awarded University Blues to qualifying members of the squad. At this ceremony , for not only her contribution to Ladies Gaelic but also QUB Snooker and Basketball, Cathy Gallagher was awarded QUB Sports Personality of the Year. Cathy is the first girl to receive this highest sporting honour and joins the ranks of Anthony Tohill and Paul Brewster in doing so.

1996-97 proved to be a breakthrough year on the pitch for Queens’ Ladies. After narrow defeat in the league by old friends , the Poly, the girls set out to beat the bogie and bring home the Ulster Championship. Tremendous behind the scenes work went into this all out effort, and the Club as a whole received a huge boost when Captain Hayley Boyle lifted our first Dowd Cup.

A trojan effort was also underway to secure financial backing and co-ordinate the O’Connor Cup All-Ireland Championship Weekend. After ten matches and some extra time, this event culminated in a banquet for the 180 guests. Guest speaker, newly appointed President of Cumann Peil Gael na mBan, Noel Murray, praised the Queens’ Club for the organisation of the whole event. Perhaps more importantly, the girls, many of whom had never been North before, thoroughly enjoyed themselves.
This year also saw the loss of many of the ‘old school’ Queens’ girls as only twelve remained at the University.

However, success certainly does breed success, as Freshers Day 1997-98 proved. Instead of the usual cajoling, girls were actively seeking to join the Ladies Club.

With up to fifty girls consistently training, the committee set up a second team, vowing to ‘find the money somewhere’. This team will participate in the Ulster and All-Ireland League series, The Ulster Championship and the All-Ireland Lynch Cup.

QUB also entered two teams in the All-Ireland Freshers 7’s with the A Team, captained by Louth’s Orlaith Kirk, winning the Shield, the first national medals to come to the University Ladies Gaelic Club. Hopefully the first of many!