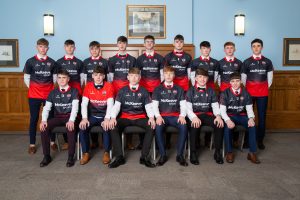 Queen’s GAA is proud to announce the awardees of the 2019 Danske Bank Queens University Belfast Future Stars programme. The awards, which recognise the top Year 12 footballers and footballers from across Ulster, are the culmination of a series of trials that took place throughout December. The selection panel was chaired by Down and Queen’s legend Conor Deegan, and included coaches and staff the university.

Deegan commented on the difficulty of selecting fifteen players from more than 120 trialists: “The quality of player on show at this level was a testament to the fantastic work being undertaken throughout Ulster Schools competitions. There were outstanding candidates all over the field, especially in the final trial and there was plenty of evidence on show that Ulster Schools football is in a very strong place in 2019.”

This is the fifth year of the Danske Bank Future Stars programme, with previous winners including Callum Brown, now of the AFL’s Great Western Sydney Giants and Tyrone senior panellist Darragh Canavan.
Queen’s GAA Development Officer Gavan Duffy said, “Queen’s University is focused on developing and rewarding excellence as demonstrated by the Danske Bank Future Stars programme. Our athletes at Queen’s are supported through The Sean O’Neill GAA Academy and their development is overseen by a dedicated staff, which includes world-leading Strength and Conditioning Coach Mike McGurn and pioneering sports psychologist Hugh Campbell. The Academy is a challenging but mentored environment within which young players can excel towards county senior football.
We are ever more conscious of the pressures that sport adds to the academic journey at University and we are very much focussed on helping students balance the twin goals of sporting excellence and alongside a world class education.”

The Football team selected for the 2019 Danske Bank Queen’s University Future Stars is as follows:

This is the fifth year of the Queen’s GAA Future Stars football programme, and award winner Ruairí Canavan is following in his brother Darragh’s footsteps. Darragh, now in the Tyrone senior panel, was corner-forward in the first team announced in December 2015. Ruairí also gets a corner forward slot in this year’s team.

Both are sons of All-star and All-Ireland winning captain Peter, who had further reason to celebrate with his nephew Sean O’Donnell, a student in Omagh CBS, also making the team, as did Callan Devlin at full-back, who plays for Peter in Holy Trinity College Cookstown.

St Michael’s Enniskillen had a good run in the Danske Bank Rannafast Cup this autumn and making the Future Stars team are two of their top performers, Fionan O’Brien and Diarmuid King, scorer of 2-7 in their semi-final defeat by St Mary’s Magherafelt.

Niall Rice is selected at centre-forward on the team and this is the first time that a student in Castleblayney College has been selected on a schools’ representative team of any description. Mullaghbawn’s Fergal O’Brien was a winning captain for St Paul’s Bessbrook ten days ago, steering his team to a 2-10 to 1-6 win over Patrician Carrickmacross in the Danske Bank Rafferty Cup final. Patrician’s Cian Conlon is one of the midfielders. 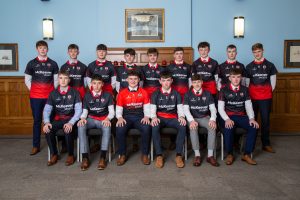 For its inaugural year, the Hurling team selected for the 2019 Danske Bank Queen’s University Future Stars is as follows:

This first ever Future Stars Hurling selection produces a significant presence from Antrim and the Ards, but the biggest cheer of the night was reserved for Oisin Marley from St Columba’s Stranorlar.

The Setanta club player has already made his mark in under-age hurling in Donegal and has won back-to-back Ulster Poc Fada title. Slotting into the half-forward line he is the only player from outside Antrim and Down to make the team.

EIGHT of the Antrim contingent come from the schools situated in the north of the county with four of those in the Cross & Passion Ballycastle panel that eclipsed the Danske Bank Mageean Cup last month.

Ballygalget’s Eoin Pucci is one of two players from Our Lady’s & St Patrick’s Knock in the selection. Eoin’s father Michael is a former Down hurler while his school-mate James Clarke and the three players from St Patrick’s Downpatrick all hurl for clubs from the lower Ards.

Gavin Duffy welcomed the addition of a hurling team to the Future Stars programme.
“Queen’s are now into the 5th year of our Future Stars programme and with the inclusion of hurling this year for the first time we are delighted with its continued progress. Queen’s University continues to support Ulster Hurling.
We are already facilitating the Conor McGurk Cup and will continue to support and celebrate the work carried out within Ulster Schools through this and other initiatives.”