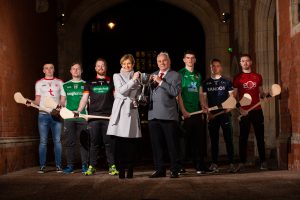 The 2018-19 Conor McGurk Cup was launched last week with representatives from the six participating teams present at the Newark Room in Queen’s. Paula McGurk spoke of Conor’s love of hurling and its central role in his short life. Oliver Galligan, vice-chair of the Ulster Council, welcomed the participants and emphasised the importance of the competition in the promotion of hurling around Ulster.

After the opening fixtures were rained out on Saturday, UUJ got the competition off to a belated start with an emphatic victory over Armagh. Queen’s take on Down at the Dub on Tuesday 18th December, throwing in at 7.30pm.

Section B:   QUB, Down & Fermanagh

Section B:  Down V Fermanagh