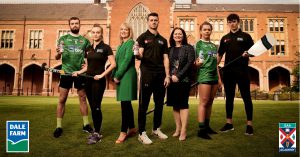 Dale Farm has become the proud sponsor of the Elite Athlete Programme and leading Queen’s GAA teams, as well as the official dairy supplier to Queen’s Sport. Along with the provision of funding, the sponsorship will see the company supply GAA Squads and athletes with Dale Farm Protein Milk, aiding athlete recovery following training and competition.

The Elite Athlete Programme was established in 2013 and aims to create a world-class environment to support top athletes in pursuit of their academic and sporting goals.

“To maintain a high quality service provision for high performing students, Queen’s Sport has adopted a support system which is designed around each individual student, based on athletic and personal development.

“We have launched a new strategy, which will focus on student wellbeing and performance. We also aim to work with local partners who compliment this outlook and help us to sustain student sport at all levels. Aligning ourselves to a major local company like Dale Farm, who is also providing our students with a healthy product, is important for an overall healthy campus ethos.”

Speaking at the announcement, Caroline Martin, Head of Corporate Marketing at Dale Farm talked about the importance of dairy in sports:

“For many years Dale Farm has been powering top teams and athletes at both professional and grassroots levels, and we are delighted today to announce Dale Farm Protein Milk as the official sponsor of Queen’s Elite Athlete Programme and Gaelic games.

“As the largest UK farmer-owned dairy co-operative, we have always placed a strong emphasis on supporting sport and have continued to invest in our protein-based nutrition dairy products,” Caroline said.

As part of its sponsorship Dale Farm will become the Official Dairy Supplier to Queen’s Sport with Dale Farm Protein Milk now a firm fixture on the nutritional programme for athletes.

“It’s not just about the training session, the match or the competition,” said Caroline. “So many of these exceptional student athletes represent their University, club, county and country throughout the year while also in full-time education. We passionately believe the healthier the person, the better they can perform in all aspects of their life.

“We share their big ambitions for future success and I look forward to this new and exciting partnership.”