Queen’s senior camogs ended their season with a major positive in capturing the Purcell Shield with a nail-biting victory over a strong Maynooth University side at Inniskeen. It was the end of a long and dramatic championship campaign which began back in November of last year. Played in front of a sizeable crowd, the game was a fantastic exhibition of skill and determination from both sides. 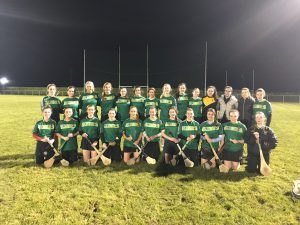 Queen’s started the brightest in the first half and raced out to an early lead. Maynooth employed a strong defensive system in front of the dangerous Catherine McGourty and Sarah Armstrong. The Belfast side found themselves with spare players in the middle third and adopted a strong running game, drawing a succession of frees which were coolly dispatched by McGourty. St John’s star Meadhbh Laverty was her usual industrious self and she drove forward Joe Baldwin’s charges to a half-time lead of 0-11 to 0-5.

Maynooth, boasting a team of several top inter-county stars from Kilkenny, Wexford, and Dublin, were always going to come back into the game, but not before Queen’s added two crucial scores to begin the second half. The momentum swung the way of the Kildare side as they chipped away at the QUB lead. There was some confusion about the score with just over ten minutes to go, with the referee insisting the gap was down to two points, while both sides had calculated Queen’s to have an advantage of four.

The stage was set for a tense finish as Queen’s retreated behind the ball refusing to allow Maynooth to penetrate their defence. The game was almost sealed when Queen’s broke the length of the field for a clear goal chance, but a magnificent save from the Maynooth goalkeeper denied the the insurance score. Nevertheless Queen’s held on for a one-point victory and write their name on the Purcell Shield for the first time since 2013.