Queen’s Intermediate Footballers cruised into the semi-final of the All-Ireland series with a victory over perennial competition rivals UCC at Ballykelly. In truth the game was over inside 15 minutes as captain Eddie Mallon bagged a fast hat-trick, the beginnings of an impressive individual performance that saw him leave the field with 4-5 to his name. Queen’s dominated the opening exchanges taking a clear foothold at midfield with Michael McLaughlin, Emmett Deane, and Conall Turley disrupting the UCC kick-outs. Queen’s were also punishing their rivals errors with deadly accuracy and there were early scores for Michael McGrath and Turley. Wing-forward Michael Cummings got in on the action with a cool finish to the UCC net after the ball rebounded off the up-right. With Seamus Warnock, Kevin McDonnell and Oisín McIlroy solid in defence, the half-time score read 4-8 to 0-4. 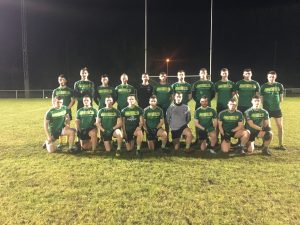 It was always going to be difficult to maintain the quality of performance on show in the first half, and UCC started much the stronger in the second period. Fearghal Rooney was shown a second yellow card with fifteen minutes to play, but Queen’s weathered the storm and Mallon slotted home the Belfast men’s fifth goal to seal the victory in the dying moments. The final score was Queen’s 5-13 UCC 1-10.

Queen’s now move on to play DCU at the Dub on Monday 26th February having won a coin toss for home advantage.