Queen’s Fresher Footballers travel to Dublin tomorrow evening with progression to the All-Ireland semi-final firmly in their sights. They will clash with a talented UL side which won all of its League Group games before succumbing in the quarter finals. The Queen’s men, having won 3 of 4 league games progressed to the league semi-finals where they were pipped by eventual winners UCD. A typically unpredictable Fresher Championship saw the league winners bested in round 1 by Maynooth, while there were also notable wins for a ferociously competitive DCU, UUJ, and Cork IT. 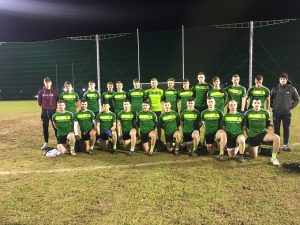 Fresher manager Kevin Murray is looking forward to the challenge ahead: “This group of players are very committed to Queens and have enjoyed their football so far this season with some good performances in the league. Last week’s win against local rivals St Mary’s gave them a taste for championship football. UL will provide a formidable challenge tomorrow evening with the management and players looking forward to getting on the road together and rising to the challenge.”

Queen’s will look to Down U-20 star Daniel Guinness to lead them to victory with Letterkenny man Niall Hannigan fresh off the back of a wonder-performance in the previous round. Conor Cox, Conor O’Neill, and Larry Kielt are also key players for the northern side as they look to reach a first Fresher semi-final in four years.

The game takes place at Abbotstown with a 7.30pm throw-in.