After an agonising week-long wait, Queen’s senior camogs lost out on a place in the Purcell Cup semi-finals on points difference when Limerick IT defeated IT Carlow by 9-15 to 2-4.  Queen’s had held a +17 points difference after beating Limerick in their fourth and final game in the competition, but this was easily overturned by the Treaty women. It was a cruel blow to Queen’s who had played some fantastic camogie in beating Carlow and Trinity.

The complexities of the Purcell Cup meant that ultimately their fate was decided as far back in November. An opening round defeat to NUIG in which they had to endure an enforced 8-hour round trip to Sligo saw them lose out on a scoreline of 4-07 to 2-08. Wins over Carlow in Darver (3-15 to 1-7) and Trinity at the Dub (3-11 to 0-7) saw Queen’s firmly set their stall out for the final game against Limerick, which would prove to be the highlight of the campaign. 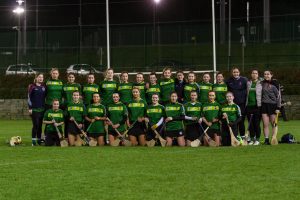 The Queen’s team which defeated Trinity in round 3 of the Purcell Cup.

A late throw-in time of 9pm, due to the lack of an earlier slot at a neutral venue, added to the drama on the Thomas Davis GAC’s 3G pitch in north Dublin. Limerick netted five times to leave Queen’s down five points with the game ebbing away but a spirited fight-back saw Queen’s land the winner in injury time. 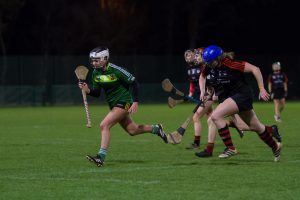 Rebecca Bradley storms out of defence against Trinity in Round 3.

Tuesday night’s result form Carlow means that Queen’s progress to the Purcell Shield final, a win in which would be some consolation for a hard year’s work on the behalf of the management team of Joe Baldwin, Ciara Hayes, Mark Rafferty, and Aidan McGowan, as well as the club committee spearheaded by Sarah Armstrong (Antrim), Jade Bradley (Antrim) and and Emma McErlean (Tyrone).

Camogs lose out on points difference