Queen’s Senior Gaelic Footballers bowed out of the 2018 McKenna Cup with a loss to Monaghan at Castleblaney last Wednesday. It was a frustrating performance following on from a narrow defeat to Fermanagh four days previous in which Queen’s had produced one of their best displays of the season. Only the feet of Lee Cullen, twin-brother of our former Sigerson star Che, denied the students a famous victory over the Ernemen. An early goal from Niall Keenan (Y3, Chemical Engineering) had Queen’s off to the perfect start. Emmett Bradley (MA Software Engineering) was in terrific form and sailed a long-range free over the bar. Defensively Queen’s were solid with Patrick Murdock (Y2, Business Management) corralling the Fermanagh attack. The hosts finally found their shooting boots as the half ended, but Queen’s held the lead by a single point heading into the break.

It was tougher work for the students in the second-half, but the game hinged on a controversial penalty awarded to Fermanagh when the referee penalised Queen’s amidst a goal-mouth scramble. A goal from the spot-kick had Fermanagh three in front but a late rally with scores from Ryan Burns (MA, Management) and the point of the day from Bradley had Queen’s back within a single point in injury time. Conor Murphy’s (Y4, Finance) last-gasp shot was scrambled to safety as Queen’s were denied the late goal and victory that their performance deserved. 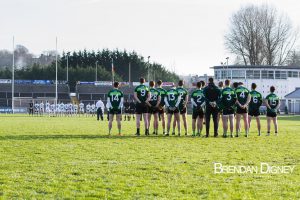 The quick turnaround for the last set of group games, the third in seven days, was not ideal for Queen’s as they travelled to Monaghan to take on a side which had won two of the last five Ulster titles. The game was played in a terrible low-lying fog and this time the early goal came for the hosts as they netted straight from the throw-in. It was one-way traffic for much of the first half before Queen’s gained a foothold with fine scores from Aidan Fegan (Y4, Mathematics) and Ryan Burns. 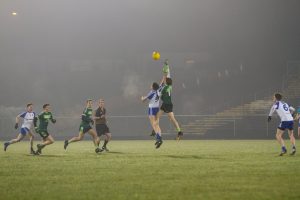 Ryan Burns (14) attempts to break ball for the onrushing Shea Heffron (8), and Callum O’Neill (10) against Monaghan.

In the second half Queen’s steadily fought their way back into the game and reduced the deficit to within two scores before Andrew Hasson’s (Y2, Finance) kick-out was intercepted and dispatched to the back of the students’ net. The game fizzled out in a disappointing 12-point defeat.

The tournament was a useful exercise for the squad with over thirty players used, in addition to some turning out for their counties. All attention now turns to the forthcoming Sigerson Cup first round tie with IT Tralee at the Dub on Tuesday 30th January at 2pm.

The following players lined out for Queen’s during the McKenna Cup Campaign: