Bank of Ireland Conor McGurk Cup Group A Round 2 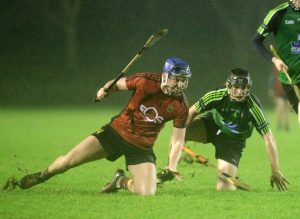 From Anthony Gunning at The Dub

QUEEN’S University gave themselves a fighting chance of progressing in this year’s Conor McGurk Cup as they scored an eight-point win over Down in horrendous conditions at the Dub Academy pitch.

THis was a game that was dominated by the conditions, with water lying on some parts of the pitch prior to throw-in and things were to get  much worse as the game went on as monsoon-like conditions dominated the opening half with the gale force wind adding to the problems for both teams.

Credit to both sides however, as they did both try and play their normal game, but were being thwarted as passes and shots were going every way and that.

However, Queen’s did look the better of the sides in the opening 10 minutes when this game had some semblance of a normal flow to it.

After Pearse Og McCrickard gave the Ardsmen the lead in the opening minute, the hosts began to assert themselves on proceedings with a pair of Oisin McManus frees edging them ahead before Fergus McCambridge pointed twice, either side of a Cormac Ross score to open a 0-5 to 0-1 lead.

The gale-force wind was initially blowing across the field, but appeared to turn to Down’s advantage for the last 10 minutes of the first half and they were to profit as McCrickard played in Danny Toner who pointed and in the final minute of the half, they were awarded a penalty when Aidan O’Prey was taken down by Aaron Carey. Up-stepped Paul Sheehan who cracked the sliotar into the bottom corner to leave the sides level at the break, 0-5 to 1-2.

With wind advantage in the second half, it was advantage Queen’s and they began to tag on the scores as Down were struggling to launch any form of attack given the conditions.

Nicholas McNaughton edged the students back into the lead four minutes after the restart and Fergus McCambridge doubled their advantage.An Oisin McManus free left three in it and on 47 minutes the Queen’s lead was doubled when a long ball in wasn’t controlled by Down goalkeeper, Stephen Keith and Thomas Murray was on hand to finish the loose ball into the net.

This was effectively game over as McManus hit a fine score from the right.

Down kept plugging to their credit and they did get off the mark for the second half when Paul Sheehan pointed from out on the left, but Queen’s finished the game stronger and they rattled off another three scores through Fergus McCambridge (two frees) and Cormac Ross to seal their victory and give themselves a change of reaching the next stage of the competition.

With thanks to The Irish News