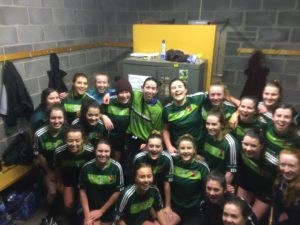 QUB II’s travelled to Dublin’s south-side with the hopes of progressing to a National League Final. RCSI opened the scoring with an early goal but Queen’s responded by not conceding a score until the second half. Queens worked the ball very well and maintained the majority of possession in the first half. QUB lead at half time, 1.09 to 1.00.

Queens were against a strong breeze in the second half. RCSI showed a mountain of resilience by pushing forward and putting a lot of pressure on the QUB defence. RCSI clocked 2.03 on the scoreboard within the first 15 minutes after the break. QUB showed a lot of character in the last quarter with some excellent team play getting the ball out of defence despite the wind and rain pelting down onto their faces. The introduction of Niamh Quinn for QUB made a great difference in the back line as it was evident there were a lot of tired bodies on the field due to the dyer conditions. Queen’s secured their spot in the league final with a last minute point kicked between the posts by Vanessa Boyd. QUB will now play either Marino or GMIT in the league final in two weeks time.