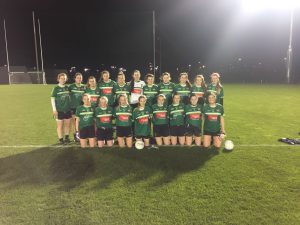 Queen’s Ladies travelled to Abbotstown last night for their final group game of the Division 1 group stages. Played in good conditions on an excellent pitch, Queen’s got off to a good start and led early on thanks to a Fionnughala Rocks goal 1-1 to a single point.

However a 15 minute period of dominance by NUIG saw them take control of the game and two quick goals and a point without reply saw them take a 4 point lead towards half time. The girls regrouped and once again, with excellent defending & some strong running from deep QUB began to re-establish themselves and with the aid of a Joanne Doonan penalty they led by the bare minimum at half time.

The girls started the second half brightly and with a number of quick points established a 4 point lead, but back again came a strong NUIG side who drew level with a number of scores including a goal to draw level. As the game entered the final 15 minutes, with the match being played at an extremely high pace by both sides, Queens got the crucial scores to edge out a tight 2 point win.