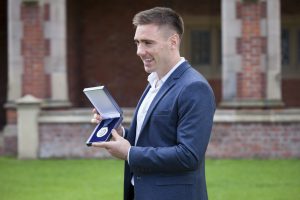 Thirteen years after his untimely passing, Cormac McAnallen’s memory and legacy was marked with the sixth presentation of a special annual medal in his honour at Queen’s University today. The university’s GAA club and Past Members’ Union initiated the annual award in 2012, which was presented at at a special reception that also included the acknowledgement of this year’s GAA Academy Scholars.

Former Tyrone star and their present U21 manager Feargal Logan (a Sigerson Cup winning captain in 1990) was guest of honour for the event, while Cormac’s brother Fergus McAnallen presented the award.

Marty O’Reilly was already an established intercounty star for Donegal by the time he came to Queen’s for postgraduate study, having claimed two Ulster medals and an All-Ireland title in 2012. His leadership and commitment to the college senior team and the club were recognised with this award. The Sean Mac Cumhaills clubman and student of Educational Leadership will not turn his focus back to the Ulster championship and the upcoming clash with Tyrone.

This prestigious honour is presented for outstanding commitment to, and performance for, the Queen’s club and the senior teams. Previous recipients include Mark Sweeney (2012), Conor Caldwell (2013), Fionnuala McKenna (2014), Michael Monan (2015) and Ryan Murray (2016).

Cormac McAnallen was an exceptional sportsman and his untimely passing in 2004 cut short a remarkable young career. He played at Queen’s for four years, winning a Sigerson Cup medal in 2000 and a Ryan Cup in 1999. He also added an Ulster and All-Ireland double with Tyrone in 2003 as well as an Allstar.

Cormac graduated from the university with a BA in 2001.

In his address at the reception last week, Feargal Logan highlighted Cormac McAnallen’s leadership as a player and his personal and sporting qualities as inspirational for those who played with him and followed in his path after 2004.

The Past Members’ Union was formed under the chairmanship of the late Paddy O’Hara in 1990. The PMU was established to foster continued friendship among alumni of the club, while supporting initatives and ongoing development of the present Gaelic Football club.

John Devaney, QUB GAA PMU Chairman, said that “the presentation of the medal is an important acknowledgment of Cormac McAnallen’s legacy, and Martin has been an exceptional example to others during his year with Queen’s. Despite having to balance commitments to his club, county, university and his studies, he has demonstrated leadership attributes and a strong commitment to the Queen’s club and his team, the very qualities that we now associate with this particular honour and they are the same qualities that we associated with Cormac McAnallen. This medal is a very special award for the recipient and it has become something that we continue to hope that players at Queen’s aspire to”. 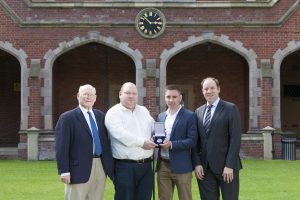 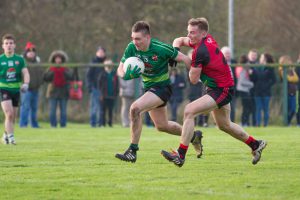