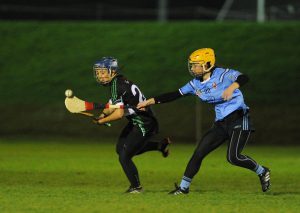 After last weeks win over IT Carlow Queens travelled across Belfast to face local rivals UUJ Wednesday night in what was a must win for the Jordanstown team who had already lost to IT Carlow.

Queens had a 11 point score different advantage at the top of the table and set up defensively against the breeze.
Qub’s Rachel Merry and UUJ’s Niamh Mallon traded frees in the first half however with the score 0.04 a piece a high ball from Dervla Magee was flicked to the Qub net by Devlin and the half time score was UUJ 1.04 Qub 0.04

At the start of the second period Qub manager Joe Baldwin introduced Bronagh McGillian and she added a early point before Rachel Merry continued with an exhibition of free taking to level the game. Aimme Mc Aleenan was working hard in the middle third for Queens and with 15 mins left she played a wide ball to Merry, which Rachel won and stepped inside Megan Diamond the UUJ fullback before lashing the ball to the net.

Further points from Shauneen Donaghy and Mc Aleenan left Qub 1.09 to 1.04 up. With a score advantage of 16, Baldwin introduced fresh legs through Nicole Smyth, Caoimhe Byrne and the robust Meabhdh Laverty. As Queens retreated to protect their winning position, UUJ threw everything at Queens in the final 10 minutes but there seemed no way through a hard working defence led brilliantly by Alannah Savage and Brid Corrigan,

UUJ would find the net again before the long whistle after Mallon hit a quick free to Dervla Magee, whose shot was deflect to the net.

Qub top the group and now play a Purcell Cup Semi Final v Maynooth on Saturday in Abbotstown at 12.45.
UUJ will play Trinity college in the Shield final this weekend TBA

After the game Queens joint Captain Eimear Hayes commented “that was another tough physical encounter. We picked up a few knocks but games like that will stand to us come the weekend. The bench is very strong as you seen tonight so we are now looking forward to Abbotstown and the challenge ahead ” 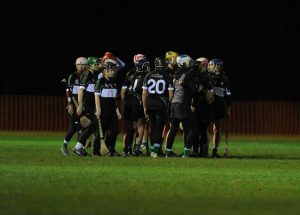