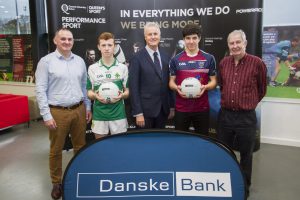 Queen’s University have announced the winners of the 2016 Danske Bank “Future Stars” year twelve All Stars.

Queen’s University have named the team selected to receive Future Stars awards for 2016. These awards recognise players competing for their schools within the Danske Bank Ulster Schools’ Year twelve competitions from “A” to “D” grades and were selected after a trial process across three days at “The Dub”, with very few simple deliberations.

Chairman of the selecting committee James McCartan commented that “As a selection panel we have been thoroughly impressed by the depth of quality at this level within Ulster Schools. We faced an arduous task to separate players in close calls across almost every position. If the quality and competitiveness of the football we had the pleasure of watching is an indicator of the next wave of footballers coming through in Ulster then we can look forward to some exciting Ulster Schools competitions over the next couple of years”.

Sean McGourty on behalf of the Ulster Schools Committee enthused that “This scheme, initiated by the Queen’s University GAA Academy is a wonderful opportunity to recognise some of the rising stars in our games. We are delighted once again to work closely with Queen’s and Danske Bank to raise the profile of our players and competitions.”

It has been a fruitful week for St Malachy’s Castlewellan’s pair Brendan McKay and Conor McAnulty. Their “Future Stars” award comes quickly on the heels of their school capturing the Danske Bank Rafferty Cup at the Dub on Tuesday night. The only other school with a double representation are St Ronan’s Lurgan, for whom both Andrew McAlinden and Adam Loughran feature in defence.

St Mary’s Limivady’s Callum Brown made a big impression on selectors and features at midfield on the “Future Stars” team. Callum looks to have a big future as an athlete as he is already on Linfield’s books and features strongly in the mix for Danske Bank Ulster Schools’ MacRory Cup All Stars as well.

Corner back Eoghan Daly comes from sporting stock as his father Peter represented his native Roscomman at all levels and won a Sigerson Cup with UUJ. In addition, his mother Bernie (Quinn) played Camogie for Antrim and netball for Northern Ireland.

Aidan O’Rourke, who is responsible for the development of Gaelic Games at the University, outlined why Queen’s initiated this scheme.

“Queen’s University is focused on developing and rewarding excellence as demonstrated by the “Future Stars”.

There is a clear performance pathway for all aspiring players in Ulster through the Ulster Schools competitions. The Sean O’Neill Academy at Queen’s provides a challenging and mentored environment within which young players can excel towards county senior football.

We are ever more conscious of the pressures that sport adds to the academic journey at University and we are very much focussed on helping students balance the twin goals of sporting excellence and alongside a world class education.

We hope that these awards will provide recognition for the ambition and determination shown by these young athletes.”

The award winners will be honoured with a dinner at Queen’s University’s “Great Hall” on Monday 19th December and will receive unique Queen’s playing kits.

The team selected for the 2016 Danske Bank Queen’s University Future Stars is as follows:

Note:
Queen’s GAA and Ulster Schools are currently running a competition to win a 5 future stars Queen’s GAA kits.
To win, answer the questions on twitter @QueensGAA with #futurestars16