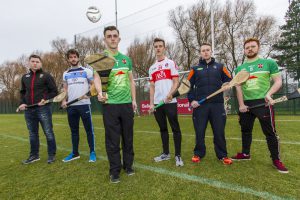 Competing teams in the 2017 Conor McGurk Cup gathered to launch the competition at the final venue at Upper Malone, Queen’s University.

Queen’s University Hurling Club are pleased to announce the invitational pre University Championship / County National League tournament to be played throughout the month of January at the playing fields at Upper Malone (The Dub).

The competition, which is supported by Comhairle Uladh, will feature this year feature six teams who will compete in a round robin league section in early January to qualify for semi final places.

The competition is named to honour the memory of Hurling Club Past Member Conor McGurk, who died in 2014 a young man. Conor read sciences at Queens and was an active member of the university hurling club. He played in two Fitzgibbon finals and was twice picked as goalkeeper on Combined University teams, the highest accolade in Higher Education hurling.

Queen’s GAA Development Officer Aidan O’Rourke highlighted the impact that the tournament, only in it’s third year has made, “The Conor McGurk tournament, hosted at Upper Malone, has filled a very important void in the calendar for county and college teams. These competitive games come at the right time in preparation for the college championships and national leagues and we have been greatly encouraged by the commitment to and feedback from all competing sides.

The tournament has great potential to grow in depth and stature – something that the McGurk family, Queen’s University Sport and sponsors The Downey Group are keen to see happen.

We have been very lucky to have benefitted from the support of Seamus and Henry Downey in this regard – two men who hurled with Conor at Queen’s. We are also very thankful to Comharle Uladh and Queen’s Sport for their financial and resource support once again, without which the Conor McGurk Cup could not run.”

“The Conor McGurk tournament has quickly become a focal point of the season for the Queen’s Hurling club. Of course the games are very important from a playing perspective but hosting the tournament itself gels the club and reminds everyone of how we got here. It is great to link current students to past members through this competition and it opens a window to let lads know something about our history and who hurled before us at the Dub.

We feel honoured to host this tournament for the family of a great Queen’s man Conor McGurk and on behalf of our current and past hurlers.”

The 2017 tournament opens on January 3rd with county derbies in both groups. 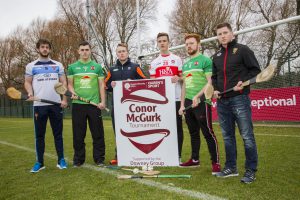