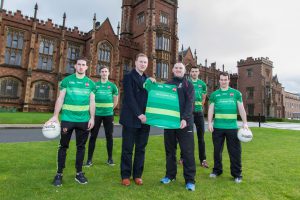 Queen’s begin their bid to reach this year’s championship weekend tomorrow with an opening round clash with Maynooth University. Today, with the help of Cormac McAnallen’s brother Donal, they launched their new jersey complete with the Cormac Trust logo. Queen’s Sigerson Cup team will forego commercial sponsorship for their campaign and will instead promote the Cormac Trust.

Cormac McAnallen was an exceptional sportsman and his untimely passing in 2004 cut short a remarkable young career. He played at Queen’s for four years, winning a Sigerson Cup medal in 2000 and a Ryan Cup in 1999. He also added an Ulster and All-Ireland double with Tyrone in 2003 as well as an Allstar. Cormac graduated from the university with a BA in 2001.

Each year, the Queen’s club present the Cormac McAnallen Medal to a GAA member who has excelled and demonstrated leadership and service to the Association at the university.

The Queen’s team, under the management of James McCartan and Paddy McKeever, travel to Maynooth tomorrow, hoping to advance to this year’s quarter finals and a meeting with either UL or IT Tralee. This year’s team includes Marty Clarke and Gerard McGovern (Down), Ciaran O’Hanlon and Shea Heffron (Armagh), Ruairí Corrigan (Fermanagh) and Ryan Murray (Antrim).

Maynooth enjoyed two victories in the O’Byrne Cup over Wicklow and Westmath, and they will add Eric Lowdnes (Dublin), Paul Cribbin (Kildare) and Fergal Flanagan (Cavan) to their side – none of those three featured in the O’Byrne Cup.

At today’s jersey launch, Queen’s GAA Development Officer Aidan O’Rourke welcomed the partnership with the Cormac Trust, stating that “Cormac’s legacy is important us, so we are proud and delighted to wear the brand of the Cormac Trust as it helps to promote their work in a small way”.