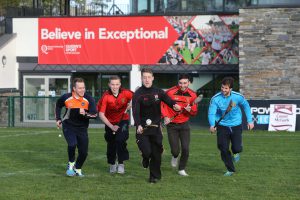 Simon Doherty (Armagh), Oisin McManus (Queen’s and Down), Nicholas McNaughton (Queen’s), Cáolan Bailie (Down) and Michael Dudley (Antrim) chasing the prize at the launch of the 2016 Conor McGurk Tournament at Queen’s in association with the Downey Group.

The competition, which is supported by Comhairle Uladh, will feature this year feature eight teams who will compete in a round robin league section during the first four weekends in January. This represents a doubling of the number of teams catered for after a very successful inaugural competition in 2015.
The top two teams will feature in the final on the Arena Pitch at Queen’s on Friday 23rd January.

The competition is named to honour the memory of Hurling Club Past Member Conor McGurk, who died last year a young man. Conor read sciences at Queens and was an active member of the university hurling club. He played in two Fitzgibbon finals and was twice picked as goalkeeper on Combined University teams, the highest accolade in Higher Education hurling.

Queen’s Hurling chairman Peter Shannon commented:
“We are delighted to be in a position to host the Conor McGurk Tournament again in January 2016. After a very successful first competition last year the interest beyond those who competed was extensive and we have doubled the number of teams we have been able to accommodate. The spirit of Conor McGurk was very much present in the games at the Dub last year and we are delighted to be able to remember such a great Queen’s man in this way.
Queen’s Hurling Club are indeed indebted to The Downey Group, Comharle Uladh and Queen’s Sport for their financial and resource support once again, without which the Conor McGurk Cup could not run.”

All fixtures will be played at Upper Malone:

Group A Group B 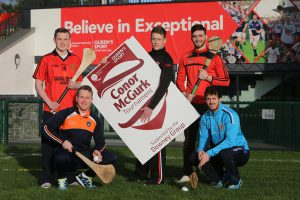