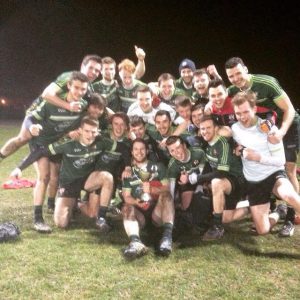 Queen’s University captured the 2015 Higher Education Intermediate title in a hard fought 2-10 to 0-09 win over DCU at the DKIT campus on Wednesday night.

The Dublin College, fresh from their recent Sigerson Cup triumph, started the game on the front foot and raced into a three nil lead in a matter of minutes – laying a marker for what could be a long evening for the Belfast students. Queen’s then got to the pace of the southerners and fought their way back into the contest steadily.

Queen’s squeezed in front before a brilliantly worked team goal on the stroke of half time opened up a lead that wouldn’t be relinquished through the remainder of the game. Ronan McGrady finished the goal chance to take his first half total to 1-03.

DCU began the second half as they had the first. Two unanswered points cut the deficit to two and the Sigerson champions had the look of a team not to be denied a senior double. The Malone road men appeared to be struggling with the change in DCU’s intensity, squandering possession easily and kicking four wides consecutively.

However, The Queen’s defence stood tall in this period turning over every Dublin attack and three great scores from David Higgins, Conor Kearns and Shea mc ardle began to weaken the DCU resolve and inch the northerners towards the finish line. A late goal from substitute Cormac Bradley killed the contest and Queen’s were able to hold possession and see out the game in the last five minutes.

This Queen’s team managed to keep their best performance of the year for the final and played throughout with a fierce intensity that unsettled DCU. The entire defence were resolute throughout and contributed handsomely to the team’s attacking threat. The midfield pairing provided a tremendous platform of possession and captain Conor kearns orchestrated everything dangerous through the middle third. The forward line worked the shIrts off their backs interfering with DCU intentions and creating space and opportunities and executioner in chief Ronan McGrady provided the reward for that work. 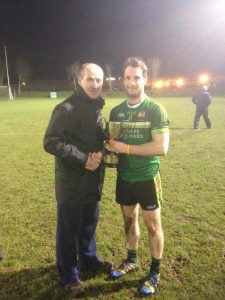