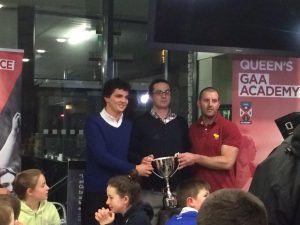 It was Derry who won the inaugural Conor McGurk tournament at Queen’s on Friday evening at the Dub sports complex, following a spirited performance from Armagh. The Orchardmen can take great courage from their performance in the tournament final with their Division 2B league campaign drawing near. Derry got off to a bright start with a couple of points, but Conor Corvan put Armagh in front when he found the net early on. The lead didn’t last too long though, as Liam Óg Hinphey soon raised the green flag for the Derry men, who piled on the pressure with another few points through Ruairí Convery. Declan Coulter kept Armagh in touch with a couple of scores and points from Martin Moan and Conor Corvan left the half time score at Ard Mhacha 1-6 Doire 1-9.

The Oakleaf county got off to a great start in the second half, with three points followed by a three pointer from Alan Grant. Armagh bounced back from the Derry goal and scores from Coulter, Eoin McGuiness and Conor Corvan seemed to settle the team. The two sides were reduced to 14 men, with Liam Óg Hinphey receiving a second yellow and Ryan Gaffney receiving what appeared to be a very harsh red. Armagh suffered another blow when an injury to Declan Coulter forced a change and a few scores for Derry widened the gap again. Conor Corvan added another couple of points and a good effort from Martin Moan left it 2-16 to 1-12. As time ticked away, Armagh needed goals but unfortunately for the Orchardmen, they couldn’t find the net and two late points from Nathan Curry left the full time score 2-16 to 1-14.

Well done to Queens GAA and to the McGurk family for hosting a great pre-season tournament and congratulations to Doire. The game was streamed live on Linwoods Armagh TV and was the first hurling broadcast outside of the Athletic Grounds from the dedicated team of volunteers, whose work continues to draw praise from right across the country. The tournament provided great preparation for the upcoming Allianz Division 2B League campaign, which gets underway with an away game to An Dún on Sunday 15 February.